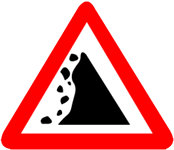 Stone throwing in Lesotho is luckily something that most travellers to the mountain Kingdom will never experience. Even so, it is an unpleasant situation for travellers and one that the LTDC (Lesotho Tourism Development Corporation) is diligently trying to stamp out.

For those that may not know, the LTDC is charged with a mandate to promote Lesotho as a preferred tourist destination, locally, regionally and internationally.

The authorities are aware of the benefits of tourism and are taking steps to prevent these kinds of incidents from happening in the future. Below is an extract from a letter written by the LTDC to a traveller who experienced such an incident.

The matter has been taken seriously and put before the local Police, Chiefs and the local council of that area, which should take care of this problem and create hospitable atmosphere for tourists who travel on that route. We will also be having workshops with the police and Immigration officers on the need to be courteous and in understanding the importance of the tourist in the country.

Basotho are known for their friendliness and hospitality. Disappointing though, is the fact that some bad elements such as begging and stone throwing are creeping in and if unattended could become a strong deterrent for visitors.

This has become a major concern for is and we have begun addressing it by enlisting the assistance of other Ministries such as home affairs in all the villages that lie on major tourism routes. This initiative has covered the Sani Top, Moteng and Botha-Bothe route so far.” Mr. Sehlabaka Ramafikeng

Stone throwing in Lesotho remains a sporadic rather than an endemic occurrence. Most incidents occur with the travellers being totally unaware of the fact that stones are being thrown at them. Only when a passenger happens to point out that stones are falling near the vehicle, would most travellers become aware of it and even then, most would assume that it is merely stones that have become dislodged from the embankments (which it well could have been).

Stone throwing in some cases seems to be directly related to begging. For example, if a tourist doesn’t give the children sweets (which they are very fond of), they will then throw a few stones at the departing vehicle as retaliation. This is why many people recommend not giving sweats for money (monies) to the children as this only conditions them to beg.

Many villages in Lesotho operate on a “posse” system where the village men will saddle up their horses and go out as a group to track down trouble makers affecting the community. Since the Lesotho government is committed to stopping stone throwing in the country, the issue will be dealt with at grass roots level.

Areas to stay vigilant in:

Many of the Lodges that operate in Lesotho will have a community development programme in already in place. If you are looking to donate items to the villagers, this can easily be done through the lodges.

Lunch fit for a King