Tarring of the Sani Pass

The long, snaking dirt pass between Himeville in KwaZulu-Natal and the eastern highlands of Lesotho – The Kingdom in the Sky – is typified by its tough ‘4×4-only‘ surface, ‘boot quaking’ turns and quite spectacular scenery, but has recently sparked controversy in a number of circles after the RSA government (under the auspices of the Department of Transport) and the Lesotho Government have joined together in the application to tar the entire length of the Sani Pass.

Phase 1 of the project has been in progress for a number of years now, with resurfacing of the road between Himeville in KwaZulu-Natal and the South African border post at the foot of the pass.

Further phases will see to the upgrade of the 33km Sani Pass (2), from the the South African border post all the way to Thaba-Tseka (3) in Lesotho, and thereby linking KZN with the Lesotho capital, Maseru. It is the “upgrade” of the pass itself that has upset environmentalists, tourists, tour operators and local communities so much.

There has been much speculation as to the merits of up grading the road to tar as this is going to take the thrill away and detract from the adventure.

The idea is greatly favoured by the Lesotho 4×4 taximen and other traders. It’s also thought that improving access will bring more tourists, more hotels, more jobs and other positive benefits to the local populace.

However, the biggest driving motivator for the upgrade is an environmental factor. The pass is surely eroding away. Currently none of the 2 governments are readily maintaining the pass, although the SA Roads department most frequently goes in to grade the road. However, grading the road does not solve the erosion issues.

Rare maintenance of the Sani Pass

Why NOT to tar it.

The magic of the Sani Pass is the challenge to drivers of 14 hairpin bends on gravel some 3000m above sea level between Dassie Corner and the summit, plus the sheer magic of an unspoilt wilderness, not to mention the views.

Also to upgrade a road that ferries on average 25’000 tourists per year, seems to beg the question that the money could be better spent elsewhere.

The pass itself would have to be fully closed in order to facilitate the engineering project which would have huge implications for both the tourism industry and local communities alike.
The Sani Pass itself going to pose a big challenge for the engineers who’s task it would be to undertake the upgrade. Russell Stow of Arcus Gibb, the consultants preparing the EIA. ‘

But it’s intended to be an all-weather road and that could be a number of other surfaces – paving, cobblestones, rocks.’

A probable solution to the concerns of dangerous road conditions in the event of ice and snow. 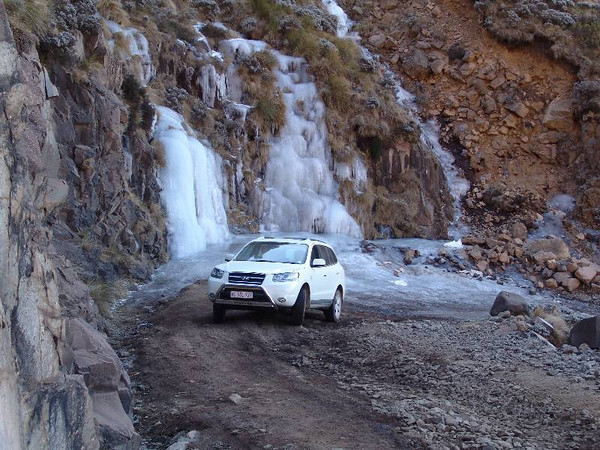 Ice section on the Sani Pass

A staggering of R490-million in fact has been earmarked for the project. The projected cost is estimated to run into the billions of Rands if the the strict recommendations not to damage the world heritage site are adhered to.

The fate of one of the most famous trails, may lie in the results of a new survey commissioned by the Wildlife and Environmental Society of SA (Wessa). Wessa says that IF the road is tarred it would have a negative effect on the area and the number of tourists that visited the area specifically for the “wilderness experience”. Of the 685 Sani Pass tourists polled, many of whom make regular trips to the area, most said they would not visit the area if the road was tarred.

This poll is supported by the resultant outcomes of a similar project in KwaZulu-Natal, where the access roads to the Greater St Lucia Wetland Park were tarred which resulted in a drastic decrease in tourism to the area.

In conclusion, the tarring of the Sani Pass may in some circles be considered a worthwhile and beneficial endeavour, however the practicality of accomplishing such a feat, unfortunately makes it infeasible or in other terms a “pipe dream”.