One of the most difficult and frustrating aspects of living in rural Lesotho is taking the public transportation.  It shows how much a person can adapt, something that used to drive me crazy now seems perfectly normal and OK.  But I’m lucky, being on a nice paved road, I don’t have the bumpy, often nauseating mountainous dirt roads that many other volunteers do.

What took the most getting use to was the speed.  The driver usually drives leaning out of the window searching the hills for possible customers.  Often a woman will be across the river or up a hill and we all sit and wait for her to take her sweet time to get to the car.  Some people do rush, but it sure does not feel like the average.  Even when we are off, on our way, we usually don’t go any faster than 20 kilometres an hour (12.5 mph) for the first 30 km.  I’ve been passed by maize-laden donkeys, old men walking with canes, and one time a toddler, toddling down the road without pants on.  For an American use to efficient, quick cars and buses, this was very hard to get used to.  But as I’ve come to see, in Lesotho what’s the rush?

Another unpleasant part of the ride is the volume of the music, which would be painful even if I liked the music.  And I have to admit, I’m not a big fan of the local music, famo.   It’s something like shouting-rap set to accordion and bass.  I think I would like it more if it was ever played at (what I consider) a normal volume or if I understood what they were saying.  I usually just catch the name of a town or some local reference followed by the names of some farm animals.

The average public transport is a khombi.  They are the size of a van and seat 15-16 people, 3 across except for the poor people in the back where they are squeezed 4 across.  Getting a seat by a window is key, because you can control that window and the airflow.  Even though it can get very hot and sweaty in the crowded khombis many people prefer to keep the windows shut, afraid it will cause them to catch a cold.  Again something that doesn’t make sense to me and my American mentality.

Most of the khombis that work in my area are not in great shape, many are older than me.  On one trip a door fell off, on another a window flew off (luckily it was a plastic replacement one).  On a particularly memorable trip the khombi broke down and for some reason only worked in reverse, instead of paying another driver to take us, our driver drove the remaining 10 km to town all in reverse.  One of the worst trips was when the driver drove the last part of the trip to my village with the front passenger seat flipped up, hammering something on the engine with a rock as he drove.  It still broke down every few kilometres and I ended up grumpily walking the last bit home.  But if I’ve been waiting for over an hour for a khombi I am thrilled when it arrives, no matter what shape it is in.  And I have never been cheated on the taxi fare. 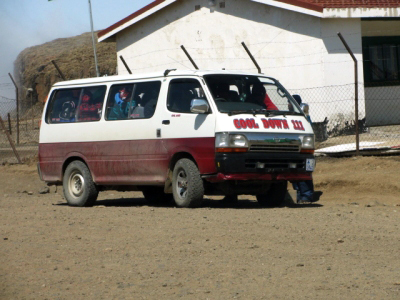 The infamous mini-bus taxi of Africa.

My favourite part of the khombis are the names.  Many have large decal names on their wind shields.  The best (in my opinion) are:  Slow Motion, Sorry Guys!, Later!, Dinosaur, and Cure Ball (misspelled curve ball).  And the khombi named Nice One, really is a nice one.

To determine if it will be a good ride, for me there are three criteria: 1) a good seat by a window (and not squished, they often overcrowd the 16 seat khombis, one time I counted 26 people); 2) a good speed (faster than a donkey); 3) a good music volume (or better yet, no music).  When I get two of the three I consider it a good ride, and all three—well it’s just wonderful.

Being a patient in a Hospital in Rural Africa