I woke up to a popping sound, not sure what it was, I walked to my curtain thinking it was snow on the satellite dish.As I opened the curtain I saw the flames protruding from the roof towards the bar side, and instantly the sky light caved into the building. With shock I just started shouting, ran to wake my management team, Martin, Melany, Kevin to get the staff, following which I ran to room 6 and told them as calmly as I could to pack their things and move to the security gate.

I then ran down the hill to the lodge, remembering suddenly that was I in socks  and pajamas, turned back, grabbed shoes and a jacket and ran down to the rest of the Mountain lodge rooms with guests. They were asked to pack what was important and drive down to the security gate near the river. Staff had begun calling all of the emergency departments at this time. 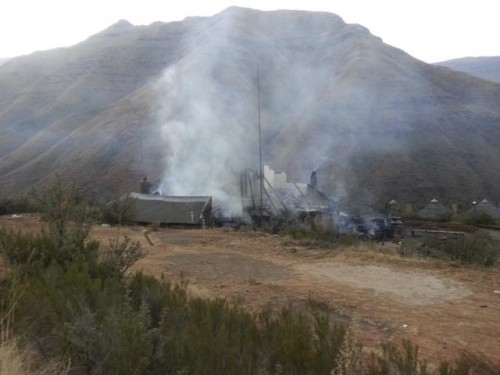 Eyes burning from the smoke, I ran back up to the main area, where staff were already trying to do what they could to save as much as possible. By that time the roof was totally engulfed in flames and 3 times higher than the 3 story building and lightning poles. I sent staff to protect rooms 1 to 5, the others to room 6. The rest fought the fire on the main building. I noticed the large cage of gas bottles on the left side of the building that had not been reached by the fire. The guys made a line up the hill to remove the gas from cages and took it as far away from flames as possible.

Meanwhile, the thatch roof of the laundry roof and the linen inside was sprayed with water to try and protect it. It was too late for the large cold room which was just next door to this. 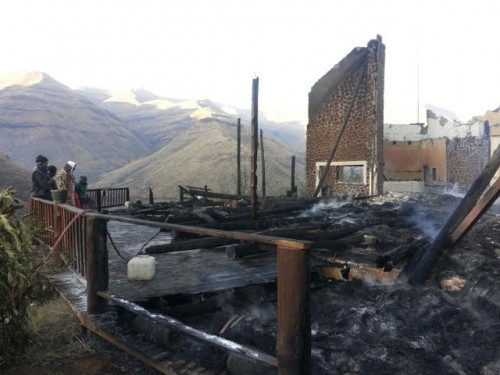 Hours past and the thatch remnants started falling off the roof and smouldering beams glowed in the darkness,. When it was safe enough we got into the ‘dry store’ and evacuated the dry food goods that we could salvage while park, casuals and staff continued to fight the fire. We were able to remove lodge laundry before the area got too hot.

As soon as we had a bit of day light we re-routed the electricity so that we didn’t have to run communications off the battery. Some pots and burners were rescued and we established a kitchen at the guesthouse to make some porridge and tea. People took turns trying to protect rooms, kill fires and have something to eat.

Police and the fire department arrived and continued to kill the flames for entire day.

A scary and shocking experience but without my entire Maliba team by my side, it would have been a different story.

The Roof of Africa, more than just a race!

Be One World – Mokhotlong Clothing Drop