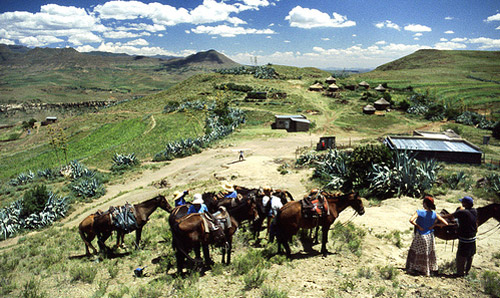 The first ponies in Lesotho are said to have been captured from the roaming Griqua tribes in the early 1800s. In 1829 Chief Moorosi, whose village was perched upon what is now known as Mount Mooroosi in Lesotho, gave a pony as a gift to King Moshoeshoe. King Moshoeshoe was so taken with his pony that he brought many more into the country & pony riding rapidly took off as the main form of transport in Lesotho, fast earning Lesotho the title of the ‘Mounted Nation’(Maloti Drakensberg Route; 2015).

Typically, the Basotho pony is an average height of 14.2 hands & is compact, sturdy & surefooted. Their colours are classically grey, bay & chestnut. Their head is medium sized with a heavy jaw & straight profile. Their neck is typically long & slender with a long & straight back (The Equinest; 2015).

As knowledge of the revered characteristics of this pony grey, so did Exports, & their fame spread throughout South Africa & Europe. This fame was enhanced during the Anglo-Boer War where they were prized for their endurance & low-maintenance care (The Equinest; 2015; Hofmeyr, 2015).

Loss of strong bloodlines during the 20th century due to export & sales during the Anglo-Boer war resulted in a limited number of true remaining Basotho Ponies. Un-regulated breeding with new breeds & bloodlines has resulted in a greater variety of Breed standards. As a result it is not common to find taller Basotho Ponies, frequently up to 16 hands & colours varying from the typical grey, chestnut & bay. (The Equinest; 2015; Hofmeyr, 2015) 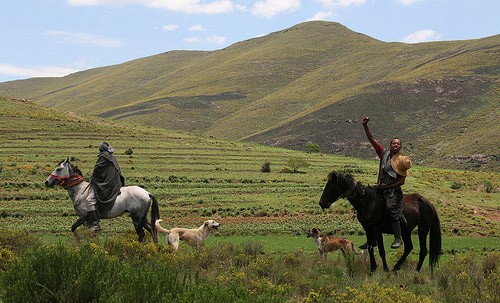 Basotho Pony and Riders (The Equinest; 2015)

Due to these changes in breed standard & owing to the recent inclusion of Boer Horse & Arabian bloodlines, the Basotho Pony breed has been the foundation for what is known today as the Nooitgedacht, one of the only breeds that are truly indigenous to South Africa (The Equinest; 2015; Hofmeyr, 2015).

Despite the breed changes through history, the Basotho Pony of Lesotho today still boasts all the characteristics to which bore its fame – a sturdy, no-nonsense, low maintenance workhorse that stays sound & can stand up to very adverse working conditions (Hofmeyr, 2015).

Due to this the Basotho pony remains an instrumental asset to the Basotho people today, still filling the role of transport through the rugged mountain passes, a draught horse, patrol horse & of course, a loyal companion. 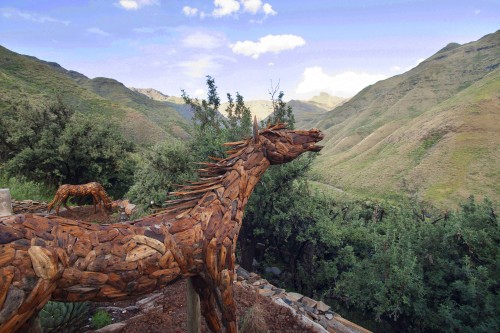 Owing to the great cultural significance of the breed, this Maliba Lodge Boasts two Basotho Pony sculptures which may be seen at the main Lodge overlooking the valley.

Hofmeyr,I. (2015) The Nooitgedachter: Steeped in history, but as modern as they get. https://www.nooitgedachter.co.za/articles/487-the-nooitgedachter-steeped-in-history-but-as-modern-as-they-get [Accessed: 05 March 2015]