Prince Harry rode into a mountain village on horseback in a colourful African royal procession before introducing his brother William to one of the world’s poorest countries.

As the two brothers began a two-day visit to the southern African nation of Lesotho, Prince Harry was given the rare honour of a royal procession to welcome him to the impoverished kingdom, where his Sentebale charity helps vulnerable children.

Wearing a traditional tribal blanket coupled with a beanie hat, the 25-year-old prince rode a bay pony a mile through the village of Semongkong, escorted by villagers on ponies, and greeted by ululating women and shepherd boys bouncing in unison along the route.

Prince Harry, accompanied by Lesotho’s Prince Seeiso, the King’s youngest son, spent much of the day visiting schools that Sentebale, the charity he helped set up in memory of his mother, has built or supported for village children and nomadic shepherd boys.

He was joined later by Prince William, who was keen to find out the problems facing children in Lesotho, where 23 per cent of adults among a population of 1.9 million are HIV-positive and average life expectancy is 34.

In Semongkong, a village nestling between snow-capped mountains 8,000ft up in the remotest part of Lesotho, the brothers met herd boys as young as eight who walk miles to attend night school after spending their days tending sheep and cattle.

They spend months, sometimes years, away from their homes and live such harsh lives that a United Nations report compared their existence unfavourably to that of child soldiers in Liberia.

With little protection against the elements, many die in lightning strikes.

Others suffer sexual abuse from herd boys and face a constant battle against rustlers and rivals seeking the best grazing ground.

When they return to their villages as adults, many are so feral that they run amok, raping and pillaging.

In an effort to help them, Sentebale has opened schools teaching them how to read and write and giving them social skills and health education to avoid AIDS and other diseases.

It has becomes one of Sentebale’s main priorities. “It’s the main thing to do”, said Harry.

“They’re herd boys from aged eight to 18 then they come back at 18 with no education, no social skills. All they want to do is…”, he added, pointing to his groin.

Some go on much longer. Mojafa Makepe, 20, has been a herd boy since he was eight and thinks he will be doing the job for most of his life for salary of one sheep per month and one cow per year, in temperatures which drop to minus 10 in winter.

“Sometimes I am away from the village for a year, staying near the cattle post on the top of the mountains”, he said.

“It’s cold, there are dogs that bite you and sometimes we fight over grazing land. One of the biggest dangers is stock theft by armed rustlers.”

Prince William, 27, and Prince Harry, 25, talked to many of the herd boys, listening to their stories, dancing to their songs, and giving them presents of warm hats.

Prince Harry gave one delighted boy a torch to help him walk nine miles across the mountains to school in pitch black at night.

Julius Matsoso Majoso, 32, a former herd boy who now teaches at one of the night schools, said: “I have been a shepherd boy and saw how I was treated by the farmers.

“I felt compassion when I saw that the herd boys didn¹t know how to read and write or even count their sheep and cattle.”

He was thrilled to see three princes – William, Harry, Seeiso – at his humble school, which has no heating and relies on oil lamps for light.

“They care for other people”, he said. 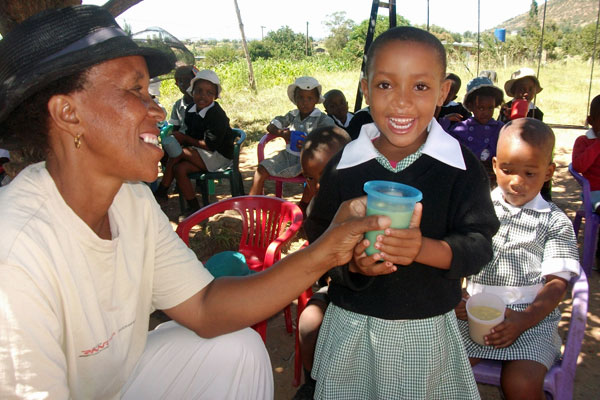