The Bearded Vulture of Lesotho

The name of the Lammergeier originates from German, in which language it means “lamb-vulture.” This raptor will often drop bones from a great height in order to crack them open and gain access the bone marrow inside – hence its old name of Ossifrage (or Bone Crusher).

In southern Africa, a drastic decline in the Bearded Vultures’ range and numbers during the past century has resulted in an isolated population that is restricted to the highlands of Lesotho and immediately adjacent areas of the Maloti-Drakensberg mountains.

The decline of the Bearded Vulture in South Africa and Lesotho is mainly as a result of a decrease in habitat and food supply, human persecution and disturbances at nests, poisoning, and electrocution/collisions with power lines.

Because of the Bearded Vultures’ small and declining population size, restricted range, range contraction, and the susceptibility to several threats in Lesotho and South Africa, it has been classified as “endangered” in the South African Red Data Book. source

Maliba Mountain Lodge in Lesotho has teamed up with experts from KZN Wildlife and the Endangered Wildlife Trust, in creating a “vulture restaurant” in the Ts’ehlanyane National Park. 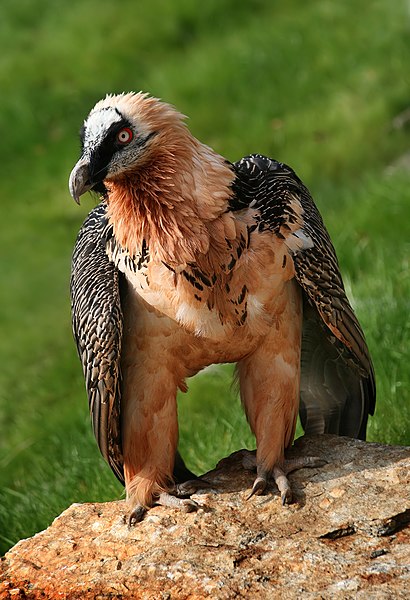 Colour:
Bearded vultures have reddish yellow or white plumage on the head and breast with a grey black tail and wings. In the adult individual the black strip over the eyes and the bristles at the base of the beak form the distinctive appearance of a beard. The white colour of the neck and under parts of captive birds as opposed to the reddish plumage of wild ones remained unexplained for many years, until it was discovered that wild birds deliberately put iron oxide on their plumage. When captive birds were provided with iron-rich water they started to bathe in it as they do in the wild and plumage went reddish again!

Like many of it’s namesake, it is a scavenger that specialises in feeding on the bones of carcasses which most other animals find inedible. Percentage of diet (70% bone, 25% meat and 5% skin). With its particularly large gape (7cm), this allows it to swallow whole bones up to the size of a lamb’s femur, while its powerful digestive system quickly dissolves even large pieces.  The acid concentration of the Lammergeier stomachhas been estimated to be of pH about 1 and large bones can be digested in about 24 hours.

What makes the Bearded Vulture unique is what happens if it finds a bone it can’t swallow whole! Should a bone be too large to swallow, it picks it up and takes it to a favoured rocky outcrop, known as an ossuary, which its habitually returns to each time. Once there it starts gliding down until only 16-70 metres above the rocks,  before releasing the bone on to the rocks. If successful the bone shatters into bite size pieces which it can swallow.

This learned skill requires extensive practice by immature birds and takes up to seven years to master.

They nest mainly on basalt cliffs in potholes at an average altitude of about 2500m. Eggs are laid in mid winter and chicks fledge in summer. Although the breeding success is high, most fledglings die as sub-adults. Adults, however, have a high survival rate and can live for many decades (40 years in captivity).

Hand me Down with SA Adventure & Maliba Lodge

Never a dull moment in Lesotho…