Why Porcupine Has Quills

Long ago, Porcupine was a most handsome creature and he possessed a luxuriant coat of fur. As he looked so splendid, and many of the other animals often complimented him, Porcupine became quite vain.

One day, while Porcupine was talking to Jackal, he boasted that if all the animals were as beautiful as he, then the world would be an altogether much nicer place. This vain remark annoyed Jackal and so he plotted to spoil Porcupine’s beauty once and for all.

Several days later, Porcupine happened to meet Jackal again. “Listen Porcupine,” said Jackal, pretending to be kind. “In that thorn thicket beyond the waterhole lives an nganga with powerful medicines that can make you look even more beautiful than you do now. Go over and seek his help. But leave your handsome coat of fur with me so that it will not get spoiled.”

The conceited Porcupine fell for Jackal’s clever ploy. He took off his much-admired coat and left it in Jackal’s care. After thanking Jackal for his thoughtfulness, Porcupine started to make his way toward the patch of thorns.

Silly Porcupine reached the thorny patch and had only pushed himself in a short distance before he was badly prickled all over by the huge spikes. Try as he might, he could move no further forward. He had to haul himself out backwards. This was very painful, for most of the thorns broke off and he could not pull them out.

“Aha,” laughed the cunning Jackal. “As you could never get your lovely coat over all those ugly spines, I shall wear it myself!” And off Jackal ran, laughing all the way. 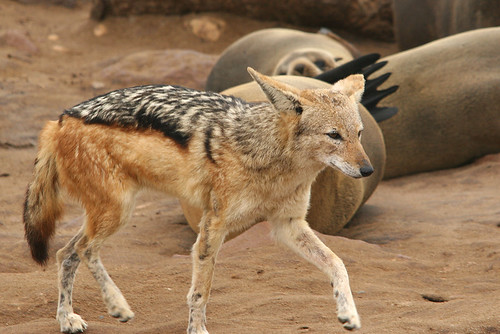 Today we see that Jackal wears a handsome coat of thick fur, whereas the dim-witted Porcupine hides away during the day. He only comes out after dark because all the other animals always mock him, remembering how boastful Porcupine was about his good looks.

as told by Nick Greaves

Down to the wire – Springtime in Lesotho