In August 2009 a Bearded Vulture was captured by Ezemvelo KZN Wildlife staff in the Underberg area and fitted with a tracking device as part of the ongoing Maluti Drakensberg Vulture Project lead by Ecologist Sonja Krüger. The project aims to obtain more information on the movement patterns of Bearded Vultures in southern Africa and the causes of mortality in order to address the threats to the species. The species is classified as endangered and population numbers are continuing to decline. 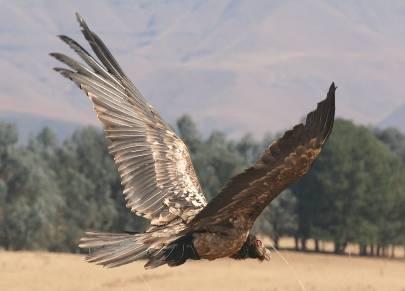 The young Bearded Vulture was named Olivia in honour of Olivia Taylor, a scholar from Durban who has assisted the project greatly with her fund raising efforts. Since 2009, Olivia has covered a large area and provided some interesting information on her movements (see map). 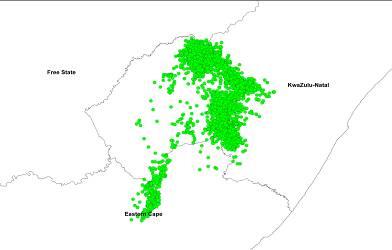 Map showing the locations of Olivia between 2009 and 2012

Two years later, at the end of March 2012, the team noticed that Olivia has been stationary for too long, which meant that she was either dead or her tracking device had come off. The team made plans to find her at her last position in Ts’ehlanyane Nature Reserve in Lesotho. In early April two staff members from Ezemvelo KZN Wildlife travelled to Maliba Lodge where staff from the lodge guided them through difficult and steep terrain to the top of the mountains where Olivia’s tracking device was transmitting from. Although they got close to the site, the team had to turn around as some local herders on top of the mountain posed a security threat. After the first unsuccessful attempt, Maliba Lodge kindly put together a team of guides who went up the mountains in search of Olivia again the following week. Without a GPS to guide them to her exact location, they were unfortunately unsuccessful in finding her.

A third and final attempt to retrieve Olivia was made by Hennry Hlela from Ezemvelo and a team of guides from Maliba Lodge in mid May. Unfortunately our worst fears were realised when they found the bird dead amongst some rocks. Olivia’s carcass was brought back to South Africa for an autopsy to determine the cause of her death. X-rays revealed no bone breakages or lead fragments (from shooting), and because her carcass had decayed so much the tests for poison were also inconclusive. The cause of Olivia’s death thus remains a mystery… 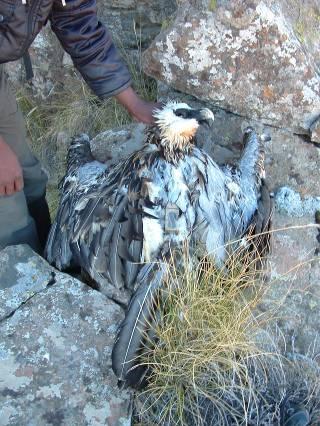 Olivia’s carcass (still with tracking device attached) amongst the rock in the Lesotho mountains.

In future the team will need to react much quicker to retrieve the carcasses so that the cause of death can be conclusive. To date, three Breaded Vultures fitted with tracking devices have died from poisoning and one died after colliding with a powerline. A Biodiversity Management Plan has been prepared for the species and much need to be done to mitigate the threats facing these birds!!