Runners from all over South Africa, as well as an international contingent from Belgium, Australia, Spain, North America, Britain and Canada, descended upon Maliba Mountain Lodge in the heart of the Maluti Mountains on Friday 29th November to participate in the Lesotho Ultra Trail – Africa’s first Ultra SkyMarathon®

Stormy weather in the days preceding the race kept organisers KZN Trail Running and Maliba Mountain Lodge staff on their toes as final preparations were made.

“The mountains are unpredictable as was the build up to race day,” commented race director Andrew Booth of KZN Trail Running. “We had to work around the afternoon thunderstorms when marking and do as much as we could in advance to ensure we were ready for crunch time. Having some of the elite athletes at Maliba days before the race added immensely to the vibe. We knew what we where working for, the event had huge potential and we had to pull it off.”

As the sun rose slowly above the Maluti Mountains on Saturday 30th November, Africa’s first Ultra SkyMarathon® got under way, with many of the runners merely soaking up the experience of their first ever trip to the “Mountain Kingdom.”

As the race entered the middle stages along the 3100m high ridge line above the Tsehlanyane National Park, heavy cloud reduced visibility to mere meters making for extremely difficult running conditions. A decision by the front three runners Mia, Calitz and Don Wauchope to press hard in the worsening weather, resulted in all three of them temporarily going off course. This opened the door for the chasing trio of Andrew Hagen, Quintin Honey and Spain’s Manuel Diez-Roabago who managed to hold on to a commanding lead as they descended to the main aid station.

“The race did not unfold as predicted and some where hesitant to give the winner Andrew Hagen full credit for a race strategy that paid full dividends,” continues Booth. “But his presence on the mountain as one of the fastest descenders in the field put a lot of pressure on the favourites who knew they needed a decent time gap before the main descent.”

True to the saying “there is strength in numbers” many runners, including the top women’s pack, maintained running in a group, slowing their pace slightly to remain on track in the tough conditions. It was only until the latter stages of the race where eventual race winners Andrew Hagen and Tracy Zunckel showed their metal, as they staved off a bold final effort from the likes of Manuel Diez-Raobago, Quintin Honey, Robyn Kime and Stacie Carrigan to take line honours in the men’s and women’s fields respectively.

With the announcement of the 2014 national South African skyrunning circuit shortly after race prize giving, which included the Lesotho Ultra Trail as the season finale, many commented that the race was set to become one of Africa’s premier ultra events, paving the way for a bright future of off road running in the Maluti Mountains.

“There are simply too many people to thank,” stressed Booth. “It was the most dynamic and passionate team I have ever worked with and the event reflected that in every aspect, so much so that I cannot wait to get my teeth stuck into LUT2014. 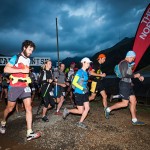 The start of the Lesotho Ultra Trail 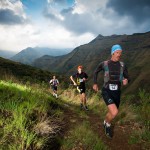 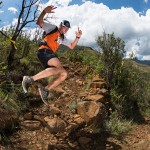 Ross Trealeaven reaching for the sky 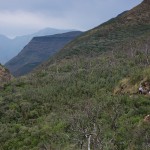 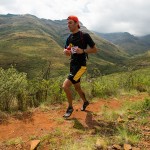 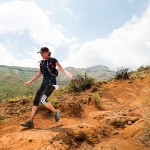 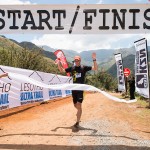 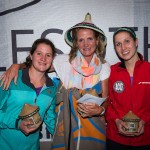 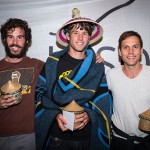 For more information, head to www.lesothoulratrail.com