A Day trip up Sani Pass by Charles Bruce 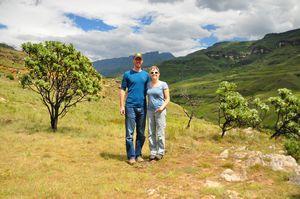 I have decided to do a separate entry about this day because it was a completely different experience from our hike in the Drakensberg. We were picked up in the morning (which dawned bright and sunny but eventually became cold and rainy at the top of Sani Pass) by our guide Stuart and set out in a group of 7 people in a well-used Land Rover. The day before we had eavesdropped on the owner of Sani Lodge telling a caller that they could attempt to drive up the Pass in their rental car, but they may end up leaving pieces of their engine behind. There was a reason that the only vehicles that we saw on this road were Land Rovers and Land Cruisers and other such four-wheel drives. A few kilometers past Sani Lodge the road turned into a narrow, rutted, rocky dirt track. Some areas were washed out and as we ascended the pass, it turned into steep switchbacks. Some were so steep that we had to do three-point turns to turn the corner! Apparently in the winter this road becomes an even bigger challenge with black ice and with South African drivers that have made the trip up the Pass to see snow, but have no idea how to drive in it. 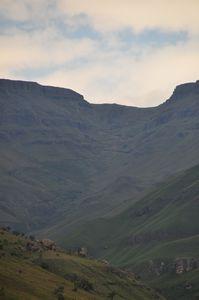 The views back along the valley and the escarpments called the Twelve Apostles were extremely picturesque and we could see the reason for the World Heritage status. We exited South Africa and crossed the border into Lesotho. This is an extremely poor country whose people live mainly on subsistence farming. The area that we drove through was an alpine meadow with tussock grass, rocks, moss and lichens. There were no trees or even bushes and the largest wild mammal we encountered in Lesotho is the Ice Rat! We only saw women and children at the trading post set up near the border and near a sheep-shearing shed which serves the area. The chief occupation of the men in that area was to be a shepherd. The sheep are owned by an absent owner and the land is owned by the king. All of the people that we met were wearing traditional dress of layers of wool blankets, reed or cloth hats and rubber boots. It seemed like a very lonely existence, but there seemed to be a sense of camaraderie among the shepherds, who are usually young men making some money for themselves or building up their own flocks. Stuart told us that they will also sing and play traditional musical instruments while tending their flocks, but we didn’t see any of these. 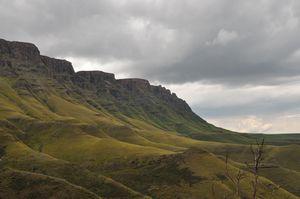 We stopped to watch some shearers at work (they make only 2 rand per sheep and can shear 50 sheep a day, all with hand shears) and then continued to drive up into the mountains to see the highest point in South Africa, and apparently the highest point south of Kilimanjaro. This wasn’t actually very impressive because it is not a peak, just a little rocky bump (Stuart used the word “pimple” on a distant ridge.

On the way back we stopped in the village near the sheep-shearing shed to visit a local woman and try the traditional drink of fermented maize and sorghum (very strong and sour). We sat in a thatched hut with cattle dung walls and floor and the others tried the hearty bread that is cooked in a pot by covering it with smouldering cattle dung coals. The woman was babysitting four preschool-aged kids and Chuck entertained them by showing them pictures of themselves that he’d taken on his camera. 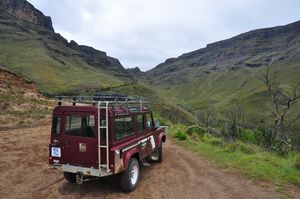 The kids seemed happy as kids do, but they had holes in their shoes and the wind and rain were cold and biting. When the kids reach school age, they leave the villages to attend school in a larger city and board with relatives, which I imagine must be hard on the mothers.

Before descending the treacherous road we stopped for mulled wine and beer at Sani Top Pass, the highest pub in Africa! The view was obscured by rain and clouds at this point so Stuart hurried us back down to Sani Lodge.

In all it was an enjoyable and informative day. Stuart seemed optimistic that Lesotho could do much to improve its reputation as a tourist destination, especially with backpackers, birders and botanists as apparently there are some really interesting alpine flora up there. The owner of Sani Lodge has actually written 9 editions of the “Backpacker’s Guide to Lesotho” and has spent weeks at a time hiking up there. At this point, the only real way to visit is with a four-wheel drive as all of the roads are gravel. 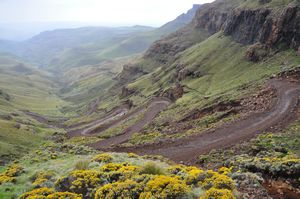 The South African government has committed money to pave the treacherous Sani Pass road, but this is

controversial as it may negatively impact the unique environment of the pass. Many locals are of the opinion that there are different things that could be done with the money to better help the Lesothos. It will be interesting to see how things change as world travel becomes more common. For us, it was a brief look at a culture and a landscape that are completely and utterly different from our own.

Hand Me Down, Lesotho Redistribution – September 2013

Why Porcupine Has Quills